was a major disappointment I knew just as soon as I saw where I was seated this was going to suck. Who ever made up the seating chart for the artshow should be fired. They had some people facing walls, and others stuck completely out of view (which is where I was). I needed to make a certain amount to even call this show worth while. I heard lots of other artists were pretty much in the same boat.

Thursday came by ^__^, it was great to see her & her hubby again. Bill Wilkison and his wife Cathy also came out, they got to experience GenCon for the first time and afterward we ate dinner at the Hardrock Cafe and had just a wonderful time. It was awesome to see them again after not seeing them at all this year, I just love them to bits.

Friday night we ( Laura, Matt, Nigel (and his harem) Me & Pat ) got to hang out with Larry Elmore and Mark Poole, which was just awesome! Also I got to talk to Major Victory and Diamond Girl again. I didn’t know till after I had read Chris Watters bio that he was in CSI NY… so… I’ll be doing a few official sketch cards of him for the CSI NY series =)

Saturday (possibly even Friday) Brooke & her Hubby stopped by, it was awesome to see the two of them again too.Saturday Night we (Nigel, Jazmine & her S/O, Dave, Dave (the originial), Spike, Me & Pat went for sushi @ Sushi on the Rocks… it was a good time ^__^ service was a bit slow, but none the less… a great time.

Sunday. A bunch of us had Larry arrested and hauled off to the Klingon Jail… I have video footage of him singing the ittsy bittsy spider, BUT… I forgot to turn on the microphone. =( as people were passing by they were paying just to keep Larry in jail 5 minutes longer.

Also so many people from MySpace stopped by, *waives*. It was great to really meet ya’ll!

I may have a few new leads, which I hope pan out… I’m kinda tired of doing sketch cards, and really miss making real artwork. So the Marilyn job I finished last week will most likely be the last job I do for Breygent because those full color art card just take too long to finish. I’ll be sticking to just black & white. Hopefully that will free me up to 1. get my prints back on my website, and 2. make lots of new artwork for the shows next year. Because I haven’t made any new artwork this year (besides Satori and Return to me – which isn’t even new just a revamp) I’ll be able to clear out some of those ideas that have been filling up my head.

I didn’t take too many pictures… but some of them are below:

Today… must finish up Heroes & then start CSI NY.

This was one of the most difficult jobs I’ve had to do… It’s mentally challenging to sit there and draw the same picture 75+ times. I’m glad it’s done and off to the AD. 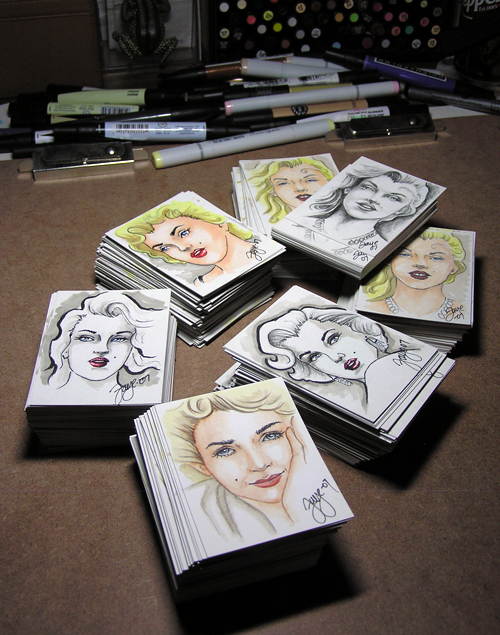 Also… Wizard World was pretty decent this year, I made back my table fees on Friday which is almost unheard of at any show. Saturday was pretty much the same as Friday. It was lots of fun.