Skip to content
GenCon is a little over a month away!

GenCon PreOrder Commissions!
Pay for it now, I do it before the show and you just pick it up from me during the show.

Ok, here’s a better view of my sketch along with some of the references I used. What really inspired me this time was the middle reference. The shot of her horses face. 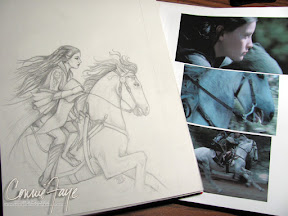 I’m hoping to have a painting of this completed before we leave for GenCon.

This little fairy was inspired by a sketchbook drawing I did the week before last. 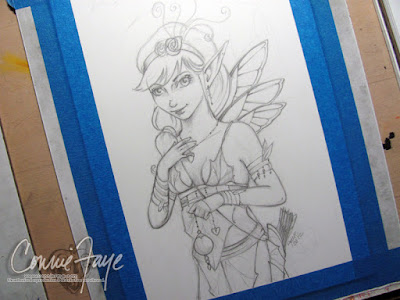 Yesterday all I did was work on the background. I had an idea of what I wanted, I worked at it, and worked at it, but by the end of the day it was crap. I really didn’t want to have to scrap all of the work I had already put into the pencils. Since I had used liquid mask to cover the figure, I thought… Gesso! I guess it was the perfect opportunity to try something I hadn’t done before… and I absolutely LOVE the way this turned out. Yay for happy mistakes. =) After this little experiment you can bet I’ll be doing more of this. 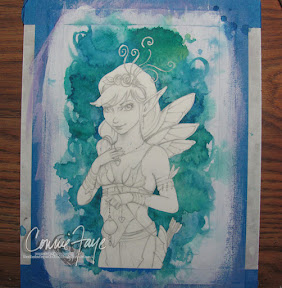 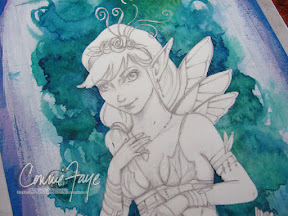 CYPHAN is next weekend (July 29-31) I’ll be there Saturday & Sunday (due to my husbands schedule I won’t be able make it on Friday unless we can figure something out).

I will have Limited Edition prints of the badge art at my table. The prints will ONLY be available at this show, once the show is over the prints will be no longer available. If you’re interested in owning the original (which we are hoping to get signed), it will be auctioned off at The Chicago Entertainment Collectors Expo’s Grande Finale Show in September, all proceeds from the sale of this painting will go to The Pediatric Oncology Treasure Chest Foundation.

This is my last week to get painting and artwork done, then next week is putting together new merchandise and working in photoshop.

Last peek of my current painting, which I’m thinking of naming after the ELO song ‘Yours Truly’. I know most people aren’t going to ‘get it’, but I think it totally goes along with the theme of the painting.

It seriously needs a pop of color, I’m thinking of painting her hair white and giving her a red dress. I have a little more to paint before I actually get to working on those two things so I’ll let it roll around in the brain pan a bit longer.

I’m so happy to make some progress on this piece after the last two days of having no electricity. Monday morning we had a really bad storm that knocked the power out, ComEd’s automated service estimated that restoration time would be Friday / Saturday. I was so upset and frustrated that it was going to take them that long, when I have so much I need to do that involves working in photoshop. Cyphan & GenCon are really just around the corner and that was going to put a serious dent in my time table. I found out from Pam, one of the cashiers at Jewel, that ComEd was bringing in crews from other cities to help get the power back on.

Tuesday at about 1130p the ComEd truck was on our street scouting our power lines, I think everyone on the block was outside watching, waiting and hoping.

I know it’s a little different for me, but I really think it sums up a majority of the artistic influences of my youth, Patrick Nagel, Classic Pinup, Soryama’s Sexy Robot, Xanadu and Flash Gordon from 1957 (the first real scifi I was exposed to as a kid, I used to watch it every Sunday morning).

so yeah, you can guess what I was watching earlier, doodled this at the bottom of the drawing I was working on.

In other news Cyphan & GenCon are less than a month away! @_@ I still have sooooo much yet to do.