So I’ve set my patreon to *hiatus*, maybe permanently.  I don’t know yet.  At first I was really enthusiastic about it, but as time went on, and I couldn’t gain any traction, I began to really doubt I could make it work.  I can’t even find the motivation to do anything for it anymore.  Maybe I’ll reactivate it once I’m in a better headspace.

Thanks for sticking with me here for as long as you have, I really appreciate it.

If you’re still interested in showing me your support, please consider commissioning me, or buying a print or other merch from my shops using the links below:

Welcome to my new blog – I finally made the jump to WordPress from the rickety old google/blogspot.  In a month or so I’ll be deleting my blogspot blog.  I really do wish that WordPress was compatible with Wix so I could just use a widget there to display my posts.  I’m sure I can find a work-around.

I need to get back into the habit of posting, this micro-blogging trend is to A.D.D. for me.

I have a show on Saturday, and I have some new sketches I’m working on for hopefully new work for that show, and products at my society6 shop.

Finished #painting "Lil'G" a little while ago, I still need to scan and clean it up and prep it for my online shops. I should have prints of it available in my #society6 shop soon. #godzilla #gfan #gojira #chibi #illustration #illustrationgram #watercolor #watercolour #paintingislife #freelancelife #freelanceartist #selfemployed #artist #art @conniefaye.art

Prints & Other Merch from Society6:  https://society6.com/product/lilg_print
Shirts & Other Stuff from TeePublic: https://www.teepublic.com/t-shirt/2758383-lilg?store_id=44359

The entire month of March I’m having a portrait special.

For me show season wrapped up last weekend with the Chicago Pop Culture Convention.  I’ve never done a show that has over lapped with the Holiday shopping season before, so I wasn’t really sure what to expect.  Even though sales were incredibly slow, several small framed paintings found homes. Which, you know, this is something I’ve been trying to do more of.  Hopefully this will be my focus this coming year:  Art 8×10 and smaller, framed, ready to hang 100.00 and under.

This year (2016) overall sales were down, because attendance was down. Several friends of mine speculated it was because of the political atmosphere of the election.   Personally I have yet to see (from my end being freelance) that the economy is getting better. I guess only time will tell.

Next up:
Now that show season is over it’s time to get working on advancing my painting skills.  For a while, I’ve been itching to experiment without worrying about messing up expensive watercolor paper. I just feel like I’m severely lacking the experimentation element of art, being so consumed with finishing work to sell.

Over the weekend I got a peek at Brian Stelfreeze’s Artbook. I absolutely love the way he uses color. And I’ve been in love with Drew’s work since I was old enough to realize who he was. So I bought a few things: books from Amazon (Amazon Prime 18% off w/free 2 day shipping) and a new sketchbook from Michael’s (YAY 50% off coupon).

I may have time to just play and start recording some of this for video episodes on my YouTube channel and maybe make some of it only available on my Patreon site.  Which is another thing I really need to work on.

This week, I’m cutting and decorating mats for the smaller works from my convention art bin. I’m also going to try and squeeze in some personal sketch/art cards. I’ll be listing everything in my Etsy Shop as I go.

Why are you perpetuating the idea that ‘The Arts” are a waste of time when you HIRED photographers, graphic designers, and actors to make your brochure?  What in the hell were you thinking? It’s not your place to tell anyone that their path is a waste of time. Shame on you.

I just wanted to take a minute to Thank everyone that stopped by that weekend.

I really appreciate talking to everyone, and sharing my art with you guys. I’ve enjoyed doing this show for the past 7 years, but this past year was my last year.

Now, it’s not you guys, it’s the city. They really destroyed this show when they decided they didn’t want to do it anymore. Even though the next year they brought it it back for only one day, the damage was already done. Also, I have a feeling they aren’t advertising like they used to; because number of people attending has been really low. This show just hasn’t come back to the way it was the year before they cancelled it.

Honestly it’s a lot of work for such low sales. I said last year I’d give it another year, and this year just didn’t pan out like I had hoped. 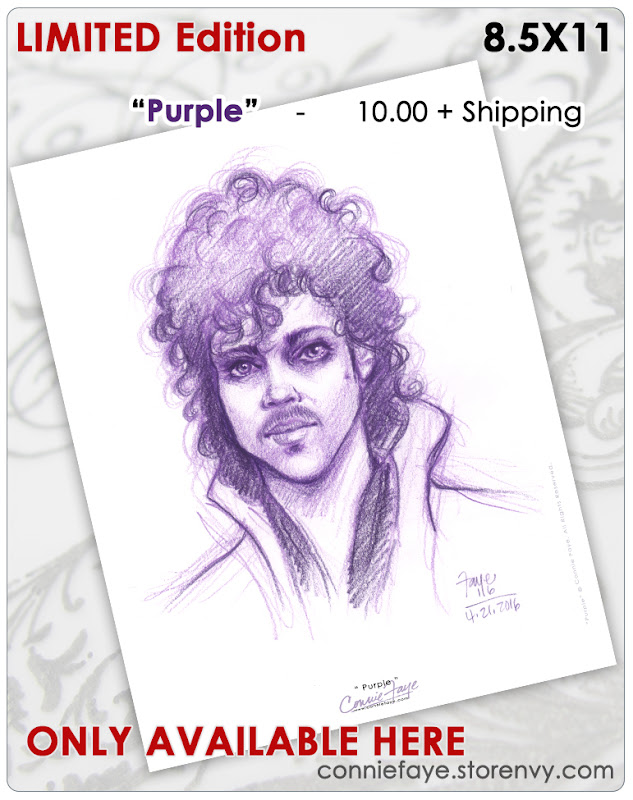 This is a LIMITED Edition Print of my Tribute piece I drew on April 21, in honor of Prince. Each print will be numbered according to how many are ordered.

Your print is bagged in a Crystal Clear, Acid and Lignin Free Archival sleeve , with 4-ply (approx. 1/16″ thick) double sided super smooth white illustration board backing, and packed in a 9×12 priority mail envelope.

All Orders Will Ship May 8th

As of March 15, 2016, google will no longer be supporting the Picasa desktop application. After much thought and consideration, we’ve decided to retire Picasa over the coming months in order to focus entirely on a single photo service in Google Photos. We believe we can create a much better experience by focusing on one service that provides more functionality and works across mobile and desktop, rather than divide our efforts across two different products.

Basically what that means is they are abandoning bloggers and desktop users in favor of mobile applications and sharing across social media platforms. Google photos is bare bones meant for the sole purpose of sharing via google plus and facebook. You will no longer be able to create thumbnails of your images or directly link to your images as we bloggers need to.

I’m just so sick of this. I pay extra to have extra storage space because comcast totally canceled their photo storage/hosting option, and I refuse to use photobucket. The sheer amount of image theft there makes me sick.

Honestly I have no idea what I’m going to do for image hosting now. Next thing, I bet, will be getting rid of blogger all together. =( Then I’ll have no other choice to move to word press (which I don’t want to do because unless you subscribe (aka pay) you have absolutely no control over your content.)

My #drawlloween2015 Limited Edition Sketchbook. Turned out to be 20 pages total, printed on 60# Bright White cover stock with a full bleed gloss cover. The video is a sampling of the pages. Check out the link in the comments for ordering. #art #artistsketchbook #drawing #pencilart #pencildrawing #sketching #halloween #drawlloween #fanart #conniefaye #artbyconniefaye

First off, this sketchbook Limited Edition, I’m limiting it to the number of pre-orders that come in, I will NOT be making any extras. I am accepting orders till November 20, then the listing comes down.

I massively enjoyed this monthly challenge, I made all the way through, and created 31 drawings. You’ll notice there isn’t a day 21, because, honestly, I was utterly stumped. But there are two drawings for day 7.

By the way, this is the ONLY sketchbook I’ll be producing for 2015. I’m hoping next year is a different story, but we’ll see.